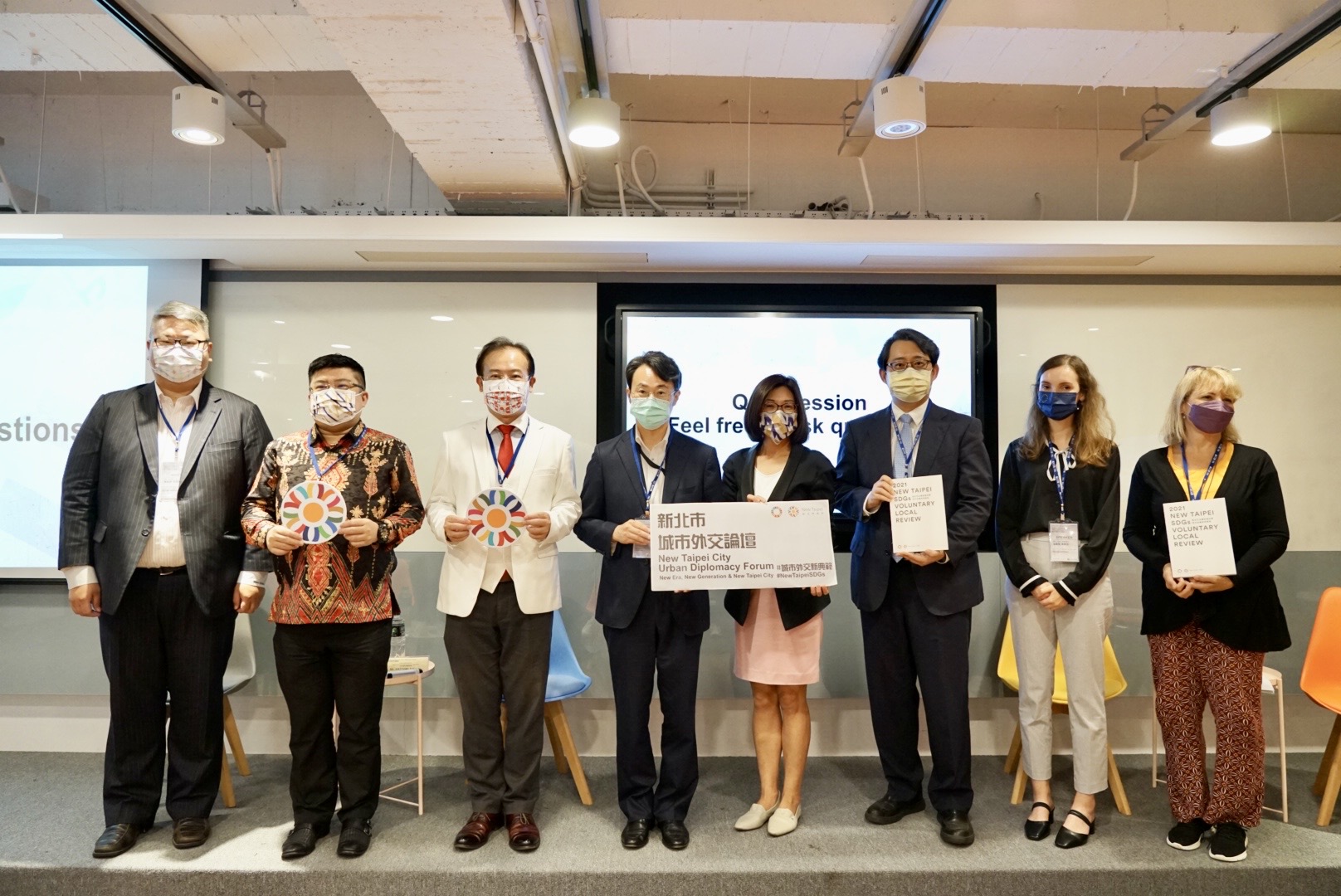 In the forum, students learned about the new trends of international relations through the lens of local governments, diplomats, and scholars and engaged in discussions on the pragmatic, diplomatic soft power of "urban diplomacy."

One student who participated in this event said, compared to the conventional practice of establishing diplomatic relations and signing contracts, direct online exchanges are more popular between international cities with Sustainable Development Goals (SDGs) as the common language in their friendships. One international student expressed that what impressed them the most was that New Taipei City has provided substantial support to cities it has a friendly tie with by donating COVID-19 supplies.

In the first session of the forum, Dr. Lu of the Department of Diplomacy in National Chengchi University mentioned the importance of "think globally, act locally" to urge cities implement localization of global trends.

Deputy Representative Takashi Hattori of Japan–Taiwan Exchange Association expressed his belief that the influence of city interactions on the international dynamics is greater than we would expect by taking the example of the tourism collaboration between the Sanchong District (三重區) in New Taipei and the Mie Prefecture (三重縣) in Japan.

Professor Tsai of the Graduate Institute of Japanese Political and Economic Studies in Tamkang University compared New Taipei City to Tokyo, citing Pingxi Sky Lantern Festivals and the tourist and cultural exchange in Jiufen as examples of successful urban diplomacy.

In the second session, Assistant Professor James Yifan Chen of Tamkang University's Department of Diplomacy and International Relations stressed that sustainability means critical international competitiveness, while Deputy Representative Philip Ong of Singapore Trade Office in Taipei gave instances such as the military, cultural, and educational corporation between Singapore and Taiwan.

To respond, Professor Klicek of National Taipei University's International College of Sustainability Innovations shared her own experience that international affairs do not always have to be serious or out of reach. As long as people have the courage to change and identify the international trend, there are many ways to build friendships between cities worldwide.

According to Director-General Chingyu Yao of the Secretariat of the New Taipei City Government, young people are future leaders of the city. Promoting urban diplomacy must be carried out in young people's way and must address the international dynamics to keep the city in close touch with the world.

Upon assuming the office, Mayor Yu-Ih Hou quickly grasped the global focus on the United Nations SDGs and adopted the SDGs as the core of his municipal governance. The Voluntary Local Review published by New Taipei City Government is now available in 40 libraries worldwide and has won awards such as iF, Taiwan Corporate Sustainability Awards (TCSA), and Golden Pin. New Taipei also delivered speeches in World Urban Forum 10 and United Nations Climate Change Conference (COP26) to make the city known to the world through multiple approaches.

Yesterday (Sep. 28), Director-General Yao was invited to British Chamber of Commerce in Taipei's Better Business Awards 2022 to share her experience in sustainable urban governance; this exemplifies how aligning itself with the global trend (i.e., SDGs) can increase a city's influence on the world and the industry sector. Yao expressed her happiness to see so many young people with a passion for international affairs gathering here in this event. Such passion constitutes a critical part of Taiwan's effort to increase its influence on the world.